Posted on April 28, 2016 by HireWPGeeks In Wordpress Maintenance 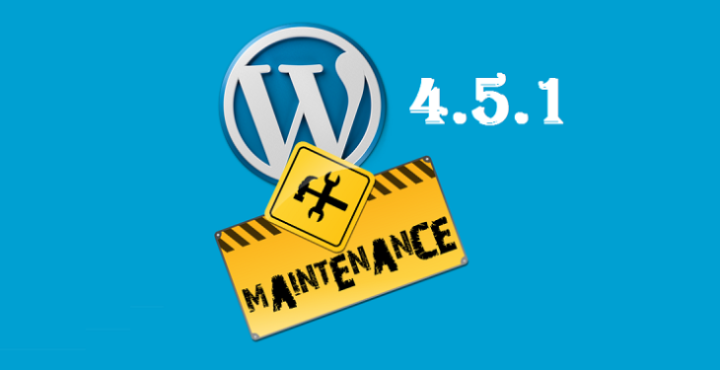 Almost two weeks and six million downloads, the dedicated core contributors came up with fixes to some major reported bugs in WordPress 4.5 Coleman. This brings us nicely to WordPress 4.5.1 Maintenance Release, available for download on WordPress.org.

The release fixes a dozen bugs with revisions made in over 25 core files. Most notable fixes include CSS class issue in Twenty Eleven theme, accessibility improvement of latest inline linking feature in Safari, Image Mgick bug that was breaking media uploads from dashboard, and IIS error that showed ‘Error 500’ message when users upgraded to 4.5 in Windows.

If you don’t follow WordPress development on Make WordPress Core, here is a detailed overview of major fixes:

npm-shrinkwrap.json is now included in core.

shrinkwraping JS dependencies will let developers install the developer-specified script versions on every deployment, regardless of dependency rules in package.json.

Major widget placement crisis in WordPress 4.5 with Twenty Eleven theme (widgets were squashed below post content as opposed to sidebars) is now resolved.

The latest Responsive Previews feature in WordPress 4.5 Customizer overlooked discrepancies in how different devices (especially tablets) and browsers display in units. This has been fixed to px units in order to give users a more consistent and life-like preview.

WordPress 4.5 brought some major performance improvements for images to core, along with a few errors. These have been fixed:

• Fatal error: Undefined class constant ‘ALPHACHANNEL_UNDEFINED’ while uploading image via Admin >> Media
• Minor bugs while sending links of media files to TinyMCE editor fixed in wp_ajax_send_attachment_to_editor()
• Persistent caching of results from wp_mkdir_p() led to caching a value for server where the directory didn’t reside, preventing further uploads on other servers. This issue has been fixed with non-persistent cache.

WordPress’ TinyMCE editor received some touch ups and fixes too. Unresponsive toolbar and tabs in Chrome have been fixed with edits in 16 wp-includes files for TinyMCE components like plugins, text color, links, popup, modern editor theme and skins. The WordPress 4.5 Inline links feature has also been made accessibility friendly by fixing support for Safari + VoiceOver during editing.

The Error 500 message after installing WordPress 4.5 on Windows has been fixed, Emoji: diversity in WordPress is now properly supported in Chrome, and a major fix (for WordPress.com VIP users) has been made in rss-http content type custom feeds.

Whether you are a developer or not, it’s always great to keep up with the rapid paced and exciting core development process.

If your WordPress install has automatic background update feature disabled, simply head over to your Admin dashboard >> Update, click ‘Update Now’, and let WordPress take care of the rest.